I have written so much about local hosting; why it should be promoted, the disappointment and double speak of government officials who say how the industry is growing yet they show lack of faith in the industry by outsourcing services to the more developed countries.

For a regulator like the Communications Commission of Kenya (CCK), you would expect them to be promoting services if the whole talk of how infrastructure has improved and how it is getting better.

I decided to check out where a bunch of sites are hosted, while doing research on an article on the value of local exchange of content. Ideally, it brings costs down if locally hosted content is exchanged locally. You can read how KIXP saved ISPs $1.5 million in this article.

So, where is CCK website hosted? In the US 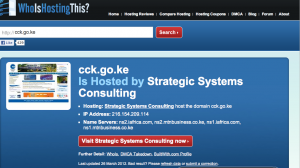 How long will it take for CCK website to resolve? See the hops it goes through below: Marseille, Newark…. etc 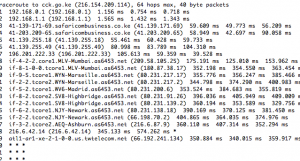 Should CCK be expected to show some support for the local industry?

To be fair, I talked to Christopher Wambua about it and he told me that they gave the tender to a local company and as it happens, the company hosts abroad.

My argument was that if a CCK supplier, whether Kenyan or not, decided to supply eggs or milk from Malawi, would they say yes just because the company is Kenyan? I thought there are ethics or what do you call those? Where a company says that we have faith in this industry so we prefer if you procured services locally.

I know people will say its cost but don’t tell me that CCK can’t pay 12, 20, or 30k local hosting just to set the pace. I know we have no faith in Kenya Power but when there is a fiber outage, it means site till accessible.

I know its the prerogative of the CCK but I thought that it was odd, whatever the reason, I hope its all worth it 🙂

What can we expect from Mucheru, Kyalo in ICT?

Turning side, back ways….

How are Kenyan Companies fairing at Connected?

Want to interact with Kenyan bloggers? WordCampKE is here…

Was the IEBC Network compromised? An insiders view……

Safaricom to lay own fiber….