In all my travels, there is one thing I have loved: visiting communities that are similar to mine; seeing them do things or eat food that I can identify with.

That is why when I got an invitation to a Xhosa/Zulu wedding, I could not miss it for anything; its literally killing two birds with one stone. It was time to witness all those things I have read online.

It was the wedding of Phangisile Mtshali and Sihlwele Manciya and I was the international guest, she made it sound so exotic!

The wedding was in Umthatha, about 200 kilometers from East London; this was also an opportunity to remember my history; what I had learnt about the Transkei homelands during the apartheid era; the scenery is great but the twists and turns can pose challenges to unfamiliar drivers.

In most African traditions, a wedding is a long affair that can take a whole weekend and this was no different; there was a traditional as well as a “white” wedding and it reminded me of how weddings have been commercialized in Kenya and the union between the two families is not a big deal especially if one does not have the money.

In a nutshell, the wedding was at the groom’s place and the bride’s family came in huge numbers, there is a lot of meat and slaughtering going on, the bride’s family comes with their goat, which was part of the Lobola, as their contribution to the whole cooking affair; the two parties must confirm that its one of the goats given as part of the Lobola, lest they bring some skinny emaciated animal with chewy meat.

The two families have to exchange gifts; the bride buys for the groom’s family gifts and vice versa. This, ladies and gentlemen is not a joke; its an expensive exercise and am sure the family regard you in higher esteem than other Makotis if you bought expensive stuff; am sure that is what most in my Kikuyu community would do.

After all the ceremonies, that is when the bride earns the title “makoti” which means daughter-in law. The whole family embraces the new bride and show her around; assuring her that she is no longer a stranger.

Whenever am in South Africa, I love eating Samp, which is a mixture of maize and beans, more like Githeri, only that its done differently. I think the main reason I love it is because the maize is first undressed while our maize is cooked with the crust, which can be rough on the throat on the chewing and swallowing exercise but the Samp is very smooth.

The meat is very soft, maybe because it is cooked over a long period and the selection trumps our boring wedding dish of overcooked rice, black peas and beef. The setting of the tables can tell you much; but again, I was a visitor, so I was impressed because this was all done in a village and not in a 5-star hotel, so it told me the level of detail that went into it.

The meat impressed because it was fresh and in plenty, again, in Kenya we are meat lovers and this played into my food loving hands lol! That is the part of the tradition that the old men in my community like, so that they can claim that women and children don’t eat this and that part, women don’t come to the fire when they are in the barbecue process while in truth, they just want to eat all the best pieces.

For such a long ceremony, it is important for the crowd to be engaged mainly through ample entertainment. There was a mixture of traditional and modern music, and boy, you have to love it!

In this ceremony, you have a right to get up and dance if you feel the rhythm is great and if you like, you can grab the person next to you, female or male and you can take the stage, albeit for just a minute.

I knew it was going to be an interesting day when I saw one lady; the oldest Makoti in the family dancing to the music just before the church ceremony started; minutes later, she was joined in the dance by young girls, who were showing such exuberance of youth, which makes the whole ceremony interesting.

If I thought the dancing at the church was great, I was wrong! I didn’t know that men can swing their waists that well that the dance becomes more sexy! Forget the Congolese dancers, they fade in comparison to the Zulu men, the movement and rhythm to the beats made everyone get on their feet, it doesn’t matter whether you are a good dancer or not, just get up and shake it!

Well, well, enter the bare chested girls; and the whole thing changes, I thought the Zulu dance of throwing up the feet was a boys affair, I was wrong, the girls did it with much vigor and energy, I wonders why they add weight later in life, they don’t even need the gym, just keep dancing; its sufficient exercise, but what do I know?

The dancing went on till after the ceremony at 9 pm, the catering team was so kind to leave the music in as they removed the decor, I imagined that back home, they would have switched off the music so people can go away; no, these guys appreciate entertainment. And yes, the youth were the majority among the last dancers, way after 10 pm.

The whole dancing affair taught me a knew lesson in engaging with people, its like crowd sourcing entertainment; when the Phangisile and Sihlwele were coming from the photo shoot, and from the change over to evening wear, people kept on dancing, showing off their skills, making sure no one was bored and if you were not on the floor, you were taking pictures.

In the end, I learnt a vital lesson; these are not shy communities; they are expressive, whether old or young, you all have a stage. It reminded me of how pretentious my society is; its rare to find men and women dancing together freely like they did.

This must be the most satisfying part of the ceremony for me, because for all the people I interacted with, we will no longer be strangers; we know that if they are in Nairobi, whether announced or unannounced, they can always say, hey, we met at that wedding!

For me, I was lucky to have Simangele and Nandi (another Makoti) to translate those things that I didn’t understand and answer some of the stupid questions I was asking, which made me fit in even more.

There were also other people whose names I cant even recall but I remember sharing conversations about president Jacob Zuma and his many wives and how women would have to queue for his attention and why we would all look for a side dish, just like one of the wives did.

You should have heard the conversation gravitate around how waiting for the turn is bad just in case you are not psyched and whether it is practical for modern men to be polygamous and satisfy all the women.

Then there was the discussion about the makotis and how some families think that they have found a new “slave” every time there is a new girl in the family which reminded me of the hostilities between mothers and daughters in law back in Kenya. The expectations seem to be common.

In this era of professional women with careers, manicured nails and designer suits, I think it can be considered unreasonable to expect what traditionally, a woman who was not working was expected to do. In some cases, you find that the families expect too much from the daughters-in law while the women born in that family are just as lazy… er…… committed.

My advantage is that I can fit in many African communities, they will always look at me as one of their own, until they speak to me, until they realize that I am not aware they are speaking to me.

For instance; in the evening I joined some people on the fire, and someone was talking to me, he must have been talking for two minutes non-stop before he realized that I had no idea. The fire was hot and I was down memory lane; stepping on the fire stones in a way that would make my grandma throw something between my legs just to alert me that my “shop” was too exposed, that is if I was wearing a skirt.

The fire became a new meeting place and for the people to share their stories and the alcohol, you should have heard the cheers when the boxes with alcohol were brought in; the excitement! New stories were shared, which made it such a nice evening.

In the end, it felt more like home away from home and reminded me that people get chances to catch up and learn during these ceremonies. 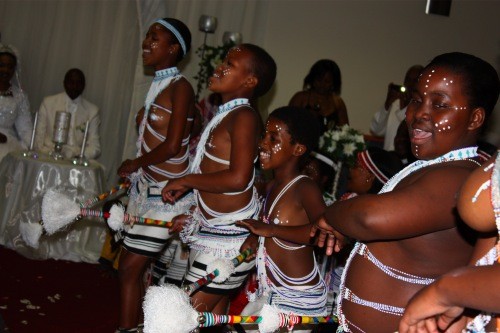