The other day I was at Mandela square late in the evening, it was cold and chilly but for the football fans who have braved worse winter weather, I guess it was nothing.

There were groups of fans, chanting slogans and working hard to outdo each other.
One corner, Argentina fans were singing their voices hoarse, Brazil was in another corner, Mexico was somewhere in between and Mexico was just there, then there were these two Swiss fans, who had painted themselves red and were only in shorts.

I guess the fans have different ways of expressing themselves and believe it or not, the stripping helped attract more women to their side; works well huh? In all these chaos, I happened to be standing next to a cute guy, from one of the South American countries; he did not speak much of English but he had a lisp and I made sure he talked and talked, forget that I was not getting half of what he was saying.

It was a pleasant atmosphere that allowed people to do things they would normally do, talk to strangers and just jump up and down. Vuvuzela or no Vuvuzela, the place can get noisy.

So, in all the mayhem, I got to know who are the noisiest fans of the day- Argentina- I think they can out-shout the vuvuzela.

Africa’s ICT in the next 12 months

ICANN President admits security could have been handled better

Ghana supporters brace for game of the day!

Kenic has a new CEO

Kenya Blogging Round Table With Larry Madowo and Moses Kemibaro

Just when you think the ‘face me’ is gone….. 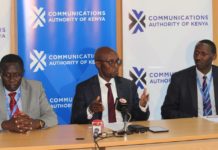 CCK set to duel with IANA/ICANN over .ke closure plans

What do old cars in a city say?