It is the first World Cup in the African continent; was well organized by all standards and most of all, FIFA website broke the record for the most unique hits. On Friday June 25th, another record is set to tumble as Johannesburg resident Thulani Ngcobo, completes his feat of attending the most World Cup matches.

The current record is 20 matches and Ngcobo is attempting to watch 38, entering the Guinness World Record for the most matches watched at a FIFA World Cup.

MTN organized a competition last year for the last fan standing and Ngcobo was the lucky winner, to break the record, he will travel more than 17,000 kilometers and watch more than 3420 minutes of football within the month long tournament.

But how does he make it?

“I must be the luckiest football fan at this World Cup and I am so grateful that I am experiencing all of this, because I am absolutely crazy about football. I kept looking around me, to see my girlfriend next to me and the organizers of my prize, to make sure it was real” said Ngcobo.

After the match tomorrow night, Ngcobo will join officials from MTN and Guinness Book of Records for a press conference and celebrations; its a dream come true for him.

For Ngcobo, its Ayoba time! 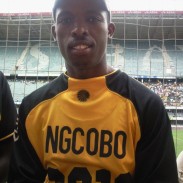