Ghana supporters brace for game of the day!

It is the talk of town, buzzing on twitter, facebook; people just can’t stop talking about Ghana and what would happen if it upsets Uruguay: Africa will have won and reached a new football high.

Everybody is an expert on football now, and hypothesizing on what Ghana should or should not do is common. This morning I took a taxi and the driver could not stop talking, giving me his run down on Ghana and how Michael Essien must be feeling bad that he is not in the team.

For a guy who can not speak proper English, I must say he was good; he gave me his analysis of what he thinks went wrong with African teams and how Portugal pulled a fast one on Ivory Coast by scoring seven goals against North Korea; meaning that the goal difference would remain far more superior.

Online, even my American friend, who I never thought had interest is sports beyond basketball, emailed me to say “go black stars”. I think its great that Ghana knocked out the US, I guess it raised some awareness.

At the Nelson Mandela Square in Sandton, fans are gathered chanting and singing while others are blowing the vuvuzelas. It seems people have gone home or their teams are eliminated because the noise is not as much.

The radio stations have been running analysis from morning and it seems the belief in the Ghana team has gone higher. People are impressed that the team may not have renowned stars like Cameroon or Ivory Coast but is playing as a team, which is vital in the games.

Whether Ghana wins or loses tonight, there will be no doubt that African hopes were high and that the people who believed in the Black Stars even before the kick off were right. 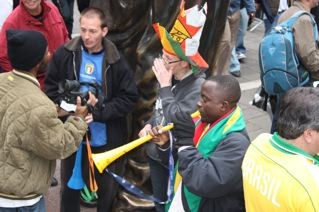