In December 2004, the Internet Corporation for Assigned Names and Numbers held its first meeting in Africa. It came from the call for ICANN to demonstrate that it was international enough, and what better way than to rotate the meetings geographically.

At that point, many African countries did not understand the role of ICANN and saw it as an extension of the US government hell bent on ruling and controlling global internet. Yes, ICANN is highly technical and even now, not many people understand what its role is and the interplay with private and public sector. By the way, if you have no clue, please read this post and these older ones.

You see, some of the problems we have on internet infrastructure have nothing to do with investment, its the people. Why buy a big capacity yet the equipment you have can only support half? In some cases, its not utilized to capacity. So, training tech stuff is better for the available resources.

Of course, only techies can get to appreciate the value of optimization at the ISP or IXP level, because it would make a difference in terms of spending but for some of us, we could care less for ICANN.

So, for the women and men who have benefitted from training on switching, IPv6, IXP and root servers, I am sure there is a difference between now and seven years ago. I have heard stories of how people met at ICANN meeting and got to exchange ideas on how different IXPs can support and work together. For instance, Malawi IXP is now collaborating with Milan IXP and the synergy will benefit Malawi. 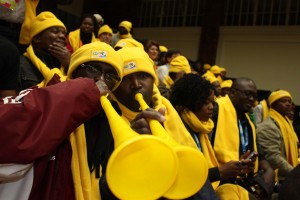 However, if you send the wrong person to a technical meeting, they will get bored, go shopping, doze around and will not get to take advantage of some of the opportunities, both in the meeting halls and in the corridors. Like someone told me sometimes back that ICANN is like a travel club, I laughed because to some extent its true but again, people attend to represent their interests and if you have no interest, then its not your place.

Africa has several thorny issues like the problem of our country code Top Level Domain (ccTLDs) most of them are a mess, and even Rwanda, which is hailed as a tech hub and a model of development, can not sort it out. Ever wondered why Rwandese president Paul Kagame uses a .com?

I have always wondered why his website is not paulkagame.rw? Imagine the kind of mileage the president would give to the administrators of .rw if he changes his website to .rw? Domains are like flags online, they give other people your identity; if you are proud you will fly it. If people dont know, they will ask, like we do with flags, and in the process you market your country (its not like am very patriotic but it helps).

Before someone says that .com or other generics are cheap, well available, better, etc..  you can read previous posts I have done on African domains, though it seems like I have something against .ke because I have written so much about it.

ICANN is the body tasked with redelegation of African domains and for the likes of .rw, .cd for Congo DRC, the process has taken longer. There is a process in identifying the technical and admin contacts and putting the infrastructure in place to make sure that if the domain registry is handed over, no one will be switched off or left in the dark. But for many government representatives who feel frustrated about the process, they dont have nice things to say about ICANN and some for better reasons.

Last week, Senegal got a copy of the L-root server, becoming the first country in west Africa to get it. This improves the security and resilience of DNS and  helps in case of a DDoS attack. You can still read about it here.

My assessment is that ICANN is having an impact in Africa; though  its in collaboration with the regional bodies, it didn’t happen over night and seems the best is yet to come.

What do you think?

Of African Public Relations Agencies and Obsession with Print Media

Angola Seeks to be the new Atlantic Hub