Last week, Gina Din Corporate Communications (GDCC) announced that it will not be pitching for Safaricom Public Relations (PR) tender. On twitter, there was so much talk of whether she was kicked out or decided not to renew, for me, all that doesn’t matter, what matters is that for 10 years, Gina Din held the Safaricom PR account, you can imagine the money that comes with with it.

I don’t know Gina and have never met her, only heard of stories of how the account rose from a retainer of shs 1 m a month to 7 or 8m, depending on who you believe. There is so much said about Gina Din CC but I will dwell on the few business lessons I have learnt.

1. The power of networks

Many people in journalism and PR circles know that Gina was a good friend to Michael Joseph, former Safaricom CEO and without watering down her PR prowess, Michael supported her in ensuring survival after five years. I am sure when Safaricom started paying her shs 3m a month, other international or more recognizable firms started angling for business but she managed to hold on to it.

Whether Gina knew Michael, was introduced to him or just pitched, got it right the first time and Safaricom liked her work from the word go, I am sure she is happy to have had such a network.

You see, in business, I have learnt that you may be great at what you do but people will choose who they do business with because they know their work, somebody else has spoken highly of them or in some cases, you are just lucky and in your pitch you impress and nail it. Either way, if you have the right people supporting you, the sky is not even the limit.

Of course there is no comparison between my networks and Gina’s while she will hang out in the high joints, where she is likely to mingle with the CEOs while the joints south of Tom Mboya street cannot do me any favors. You can imagine joints with names like “Reke Marie”, “Njugima”, “mboco-ini”, Mutigwo iganjo” etc…

Michael is also said to have helped and inspired many journalists, opening their eyes to opportunities, putting in a word where possible, some were able to take advantage while others could not be helped, opted just to pursue hand outs.

So, taking que from Gina, I am optimistic that soon I will get one influential person who believes in my abilities and it may be the end of my association with poverty 🙂

2. Knowing when to call it time

For those who come from coffee growing areas, you know that by 3pm, the coffee must be on the way to the factory. So, in my family, we used to tell each other, “umira na karia ugethete” loosely translated to mean that when time comes, you get of the farm with the coffee you had picked. In most cases, whether commercial or family, we would be paid for what we pick, young and old.

For me, I think Gina decided to get off with what she had. The money she had made after 10 years seemed enough and hey, she bagged a contract from Orange, how cool is that?

We have seen cases of people trying to hang on to something that is past its time and in the process, make enemies and say things that could have been avoided. I wish many people, especially politicians can learn how to call it time.

I am sure when that tender was sent out, GDCC must have know their time was up and as you can see, they jumped ship.

There are many companies that would like to have the level of media presence that Safaricom has. I was speaking to a PR rep the other day who was laughing at how they went for a pitch and a client was complaining that they have not been getting coverage like Safaricom and that is why they moved from the previous agency. That is great for GDCC.

For journalists, I think its easier to pitch a story to another and in some cases they will tell you that you need to write because the client needs to see something, and given the history, you have to. Which reminds me of sometime last year when a former colleague, now in PR had Nokia Siemens top global guys in town and he needed tech journos to ask questions, and he sort of insisted that I must be there. Well, the traffic situation meant that I had to get off a mat in Ngara and by the time I got to KICC, I was late and you can imagine the sweat, all because a former colleague had insisted it was important. Well, of course there are others who you cannot go to such lengths.

So, hiring journos has worked well for GDCC and media coverage, even though some will argue that there is nothing in media coverage and that corporate communications entails more. 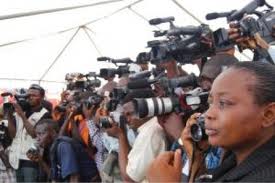 Then there is the thorny issue of salaries. There are also other people who will tell you that GDCC doesnt pay well and that is why they hire journalists from certain media houses and not others.

Well, if a journalist is not well paid and GDCC pays them a bit higher, then they can use it as the audition to get to the well paying PR company that will only poach them after proving themselves at GDCC. By the way, some of the so called PR gurus have passed through GDCC and I must say I have never heard any of them talking badly of the pay at GDCC. Maybe its because in our earlier years we worked as correspondents, the pay was poor and delayed, but don’t ask how we survived 🙂

If you look at it, much of the success at GDCC has been acheived by journalists who do not boast of masters degree, MBA and other papers, that shows the level of quality in the newsrooms.

I digressed so much, now I am not even sure of the point- I guess, its make as much money and use readily available cheap labor :).

There are companies that are not focussed on delivery, they want pitches that show how the office is well equipped with employees with masters and ability to spin theories but not delivering. I am told pitches nowadays are about photocopiers that also make tea, air conditioned offices, nice locations etc.. so, if your office is in one of those based at Mageso chambers, mugoiri house etc… you may not go far.

So, the pitch is up, GDCC snapped Orange from Ogilvy, lets see if Safaricom goes to Ogilvy, or Hill & Knowlton, also part of Ogilvy East Africa. On another note, Safaricom may just decide to promote another up and coming local agency.

Ten years ago, Gina Din may have been small but today, its big. Can you imagine going for a pitch with 10 years at Safaricom under your belt?

Well, enough with all the PR talk.