What has the iHub achieved?

In March 2010, Kenya’s tech Community came together for a unique event; the opening of the iHub. After many years of discussions and Bar Camps on what was ailing Kenya’s tech community, the presence of an innovation hub was deemed as key.

During those discussions, techies said that one of the  reasons they hadn’t ventured beyond their employers was because they had no space that could serve as an office space or a reference point. If you need a contract, it helps if you are not a briefcase entity.

There are other reasons why the iHub exists but for the sake of brevity, I will deal with one; the relationship between the iHub and the devs, creatives or anyone who is a member. For the sake of consistency I will call them all techies.

For the original stories in 2010, you can read this piece by @whiteafrican or this piece I wrote on the iHub blog those days. 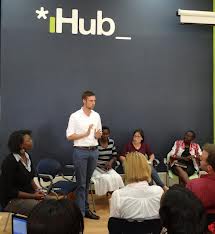 I usually talk about the iHub a lot and people share with me a lot of questions and the common question usually is; “What has the iHub achieved? Where are the businesses growing from the space?”

Usually I go on and on and in some cases I just keep quiet. You see, there are the arrogant types who think others can not develop anything and there are the genuine ones who want information and are concerned, and those are the ones I am concerned with.

To demonstrate the concept of the iHub, I usually use the analogy of the market. In this case, you can take the open space to be the open air market and the iHub operators as the market administrators or kanjo.

You will also have the seller who is quiet and since they can not shout, they will collaborate in teams such that if you sell tomatoes and I have Oranges, you can always tell your customers to buy from me and in return I will do the same. Then there is the one who makes a deal with the guys selling paper bags and providing parking, once you park your car, the guy provides you with info on where you can get a good deal, but that is because he will get returns at the end of the day.

This is innovation and invention. Whatever works, the goal is to make money.

Then there is the other person who doesn’t bother with innovative ways and just sits back and waits for the people to come. At the end of the day, these people will probably be complaining that that market sucks while the others will be singing on the way home.

For the admin, the least they can do, is to make sure that the market is clean and is relatively secure. They can also license some events like crusade or wholesale promotions, just to attract people who do not usually come to this market.

Now, with the analogy in mind, whose responsibility is it, to make sure that the people who are in the market reap the benefits and flourish? Ideally, if you came in selling one item or smaller quantities, you should graduate with time, which should be commensurate with your hard work.

When I was growing up, there was a proverb that “mwana wi kio ndagaga muthambia” which loosely translates to hard work is always rewarded. I can’t tell you the many times my mother used the saying just to make sure I did extra work at home 🙂

Back to our iHub story, if there is the space that is supposed to help you grow, should I question the administrators on the success rate or the techies themselves? Ideally, once you move from the iHub, your business should be incubated, elsewhere, in your bedroom, office space or an incubation hub.

I have had a chance to interact with the techies at iHub and I noticed that it is a cultural problem, the era of instant gratification, no one wants to work hard and earn their stripes. You have space, the success or lack there of is in your hands.

Yes, there is a responsibility to attract high caliber people capable of growing businesses but if the people come in and the process of growing the idea or business does not start or vest, who do you blame or question?

If you use the market analogy above, you will realize it is not different, once you get an opportunity, you become innovative and inventive, depending on your personality, and at the end of the day, you can say if it was a good day or not.

I have not asked about the achievements to the iHub, I will leave that to @whiteafrican to do a post on that.

When you think of the techies at the iHub, what kind of business people are they, in relation to the market analogy above?

For the business side, look out for the next post.