What Matiangi can learn from Ndemo

When it became obvious that Bitange Ndemo would not be taking over as the Cabinet Secretary in the Ministry of Information and Communication, the ICT community wondered who would wear the giant shoes left by Ndemo.

To calm the nerves and prepare for his exit, Ndemo wrote to the ICT industry and you can read it here.

So much has been said about Ndemo, both positive and negative but the thing I am most happy about is his easy approach; want to see him, drop him an email, get an appointment at 6 am or earlier. Want to interview him, drop the questions on email, and for some reason I would have answers in 24 hours, on email. No reminder, he will do it.

To understand better why I am not just praising the former PS, just read this post I did for Capital website  in 2008

From Ndemo’s introduction of Matiangi, you can see he tries to be cordial and act like they are friends. In reality, they are not and I am told Matiangi hates it when someone tries to refer to something Ndemo did, he just doesn’t like the guy. I remember during Connected Kenya this year, there was an event organised to honor Ndemo and Poghisio for their contribution to the ICT sector. Matiangi refused to attend. The PR story was that he was meeting the governor of Mombasa etc

My introduction to Matiangi wasn’t a very pleasant one; the first time I happened to be seated near support staff complaining about one of those things that if I write it will appear personal. The second I was just a spectator and just listened to the Q&A from journalists, the third was yesterday. 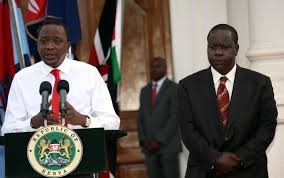 Let me start with the spectator event, I just listened and wondered how he made it to be CS, jeez, the answers, the consolation is that the guy has a career in politics. You know where people just make amorphous, non committal statements? Yes those ones.

I recall a journalist friend saying…. aaiii this guy… he doesn’t seem to have the depth of the ICT industry that we are used to. We agreed that we could be haste in judgement but again, the vetting panel must have gauged the depth. We agreed that everyone deserves time, but what time?

It has been five and a half months since he took over.

Then I got this invite about Africa Development Bank, Silicon Kenya and Public Private Partnerships. I thought, this is the right time to talk to Matiangi about PPP matters, after all, it has been five months.

As usual, I spectated, just to hear what other journalists ask and his answers. There were questions on VAT and reviving the ICT sector. His answer was those pedestrian ones, you will wonder whether this was the same ministry that has suggested a raft of tax breaks for investors in Silicon Savannah, Konza Technolpolis, Silicon Kenya or whatever other name the gold mine will be called.

Without further digression, here are my suggestions

1. Awareness of the critical issues

Matiangi spoke at a function on public private partnerships, and spoke about national broadband strategy and 4G as the solution to connectivity problems. When I asked him the status of the 4G deployment and the infighting within the bidding consortia, he said the matter is with the technocrats and he can not comment.

Yes, we have a PPP Act and the latest was that the Act was holding the appointment of the consortia. You can not do it without a policy and the Act governing, now we have the Act, what is the next step or what is holding.

Psst….. the inside story is that the Consortia is being realigned according to who you know, so if you had spent money, this is a new dispensation, we are new people. You get my drift?

To be honest and from the many years doing interviews, I knew Matiangi had no clue by minute two, I tried to ask whether they had agreed on which company would lay which areas and whether the county structure would affect and honestly, the guy drew a blank.

It made me believe that he was not prepared, but how do you come to a PPP event, talk about 4G and you have nothing to say about the progress on deployment?

If it was Ndemo, he would have had the brief or anticipated the question and therefore have a possible answer. I know I have no place to advise Matiangi but it probably is a fail for his batalion of PR gurus, experts within the ministry and his PA.

You are supposed to give the lead to other ministries to get rid of printed speeches. I suggest power point. Ndemo spoke off the cuff which demonstrated a grasp of the industry and the attendant issues.

Imagine a speech….. Kenya is the leading in digital this and that, and you are reading from the Moi and Kibaki era printed speeches? Not cool.

I know Ndemo ruffled feathers with his statements and bold moves, but that was because he was either informed and could take decisions. For instance, during last year’s ITU WICT, the CCK had taken one of those retrogressive stands in cahoots with the Arab League, Ndemo defied them and he had commons sense on his side, the CCK folks had per diems and future appointments of their side. You can read more about it here.

So, it would be great if once in a while, leaders can stop hiding behind bureaucracy and lead. At that point in WICT, Kenya needed a leader and Ndemo was, he just did not listen to the technocrats and tow the line, he had the public interest.

I know Matiangi has tried by writing a few emails on the mailinglist but he is yet to get the hang of it. I know government is not ran through email but for a digital community, this may be the only true forum of engagement because not all of us can secure appointments.

I know it will be too much to ask to have a functional website that has a blog etc that you can use to engage. Seeing that you are still in written speech, I also don’t want to be unfair.

Ndemo knew and still does use the online mailing lists and twitter, forgive him for forgetting that he approved some of the stuff like his recent tweet that we should have digitized the company’s registry, forgetting that he did that with a handsome grant from the World Bank, and an unfinished product.

Anyway, may be I am stuck up on my old ways but after five and a half months, Matiangi has underwhelmed me. Maybe the best is yet to come.

I will continue making suggestions that can either be taken up or not.