Last year, I wrote this story of pathetic connectivity at the Connected Kenya Summit. The issue was; how can you have a conference talking about connectivity and one of the most touted regional company can not manage internet connectivity?

This year, Liquid Telecom decided to abandon its core business and succeed in the food and beverage department. While the wifi didn’t work from the word go in the morning, Liquid shakes were working very well and some internet-frustrated attendees enjoyed the milkshakes thoroughly. 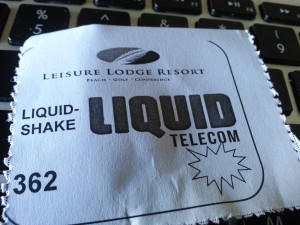 I am sure for some people, having no internet connectivity is good for concentration but you know what? we are so hooked that people switched to their mobile hotspots, which means that in a room of 400 people, there were probably 300 hotspots.

I have attended the Mobile World Congress, which is attended by 100,000 people and each provider has their network and yet, the public wifi works very well. How does it work?

Anyway, I think Liquid had a problem with their network and for a company of their repute, I think we should have gotten a better excuse/reason.

Apparently, the organisers were promised an STM1 (155mbps) and Ben Roberts, Liquid CEO confirmed that they were pushing 170mbps which is huge.

The duties were also subdivided; Orange were providing online streaming and Liquid to handle the conference connectivity.

But the milkshakes worked well for all attendees….