For those who have been following the tech sector closely, you will know that there is a lot of money floating around for big projects. The only challenge is that very few projects go to local companies; you can cite the common excuses given, lack of capacity, financial backing, etc

This means that most of these projects are deployed by big international corporations. One of the contract requirements is that these companies must transfer skills etc etc… we all know how it goes.

Let us take the example of IFMIS I wonder how many people remember what exactly it does. Well, read it here . This project is using Oracle. Apparently government paid for 14 modules and only three or four have been implemented. The project started in 1998.

Apart from that, it is said that the government has spent about Ksh 100 million on Oracle licenses across the various government ministries. Just calculate the amount of money paid in licenses annually.

That is why, in my estimation, the greatest winner in the whole government digitisation favours Oracle because the government can not afford to vote away from the investment.

So, is Oracle happy at the continued support that it will receive from government going forward? I caught up with Gilbert Saggia, head of Oracle in Kenya and asked for just five minutes.

“I can not talk in the absence of my PR person, maybe we can do this tomorrow?”

Well, companies have rules and regulations but I haven’t seen him or got a reply to my email, so we assume that was the answer he wanted me to have.

Three years ago, Dimension Data won the tender to implement Unified Communications within government. It is a way for government to stop using landlines and reduce the communication costs.

I have not gotten the actual costs, some people privy to the tender say it was $16 million while others insist it was about $30 million. Take your pick.

I tried to get a response from Dimension Data and this is what I got. 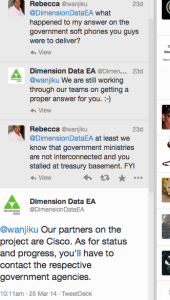 I asked Victor Kyalo, ICTA CEO, on why the DD project had to take so long and he explained that political changes, building preparedness etc meant that only two government ministries are interconnected.

The project is expected to be completed soon 🙂

Why do international companies decline to answer questions on these tenders? Is it:

a) That because government is a client, they have to be the ones to comment, so who are you to comment? Thats if you want more biz.

b) The companies do not want to be associated with failed/stalled/lengthy (insert yours) ongoing projects?

c) They are there for the money and do not care whatever happens to the project, they sold whatever they were selling, they earn from annual support and licenses and anything you would like to ask is none of their business.